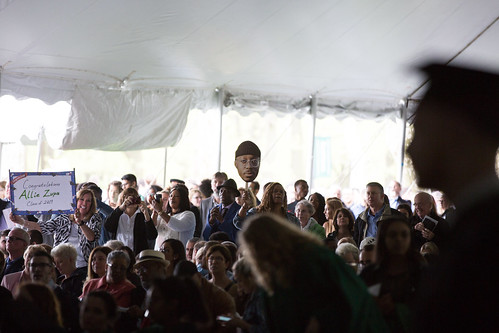 SENIOR AWARDS BANQUET. On Thursday, May 9 — the night before commencement — Wagner College held its annual senior awards banquet. This year, 61 students were recognized for the academic and civic achievements they accomplished during their undergraduate careers on Grymes Hill.

See the entire list of senior award winners, including descriptions of the honors accorded them.

At Wagner College's 2019 commencement exercise, Richard Guarasci was awarded a doctor of humane letters degree, honoris causa, as the college's longest-serving president (2002-2019). Last year, President Guarasci announced that he would retire at the end of June 2019, so this served as his farewell address to his beloved Wagner College community.

As has become our custom in recent years, two students were chosen in an oratory contest as speakers for their graduating class: Kenya Z. Hyman of Ajax, Ontario, Canada, and Daniel S. Smith of Hauppauge, N.Y.

Read the introduction to Kenya Hyman, followed by her commencement address.

Read the introduction to Dan Smith, followed by his commencement address.

Wagner College posthumously awarded a master’s degree in business administration to the parents and daughter of the late Tyamonee Johnson ’18 M’19, who was slain at the end of 2018 while home on winter break.

The most complete reporting on the killing of Wagner student Tyamonee Johnson was on the local news broadcast by WUSA-TV in Washington, D.C. “Tyamonee Johnson was a young man with a hundred things going right: college football, an M.B.A., a beautiful 10-month-old daughter,” the story opened. “But just before New Year’s one thing went terribly wrong and now his Fort Washington family is preparing to bury him.” Read the WUSA story about Tyamonee Johnson here.

To conclude Commencement 2019, the Wagner College Choir, under the direction of Thomas Juneau, sang our alma mater, “Beautiful Upon a Hill,” written in 1941 by Wagner College senior Frank Betancourt.

To read the complete commencement story from the Staten Island Advance, including the roster of graduates, click on the image below: